The International Taste Institute is the world’s leading taste certification organization. Every year products are tested by a large panel of professional taste-experts. Medals are awarded to those who exceed the expectations of the judges who are carefully selected based on their experience in tasting.
Since the first tasting award in 2005, the Superior Taste Award has become a significant stamp of quality. Products reaching a score of more than 70% are granted the prestigious Superior Taste Award, with either one, two or three golden stars:

It is a great pleasure to announce that Möller’s Cod Liver Oil once again has received the Superior Taste Award. This time for our 4 variants: Tutti frutti, Apple and Natural taste who received one golden star and the Cod Liver Oil Lemon taste has been granted two golden stars. 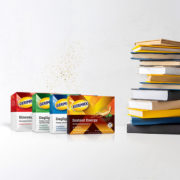 We all know the feeling. Summer vacation is over, fall is coming. In most countries it’s getting darker, you are feeling exhausted and in lack of energy. And before you know it, the calendar has switched to October and September is long gone. Right now, we are experiencing a transition period and it’s common to Read more

Heroes comes in many shapes and forms. A hero can be your best friend, your mom or dad. Your colleague, an athlete or maybe a movie star. A hero can be defined as a person who is admired for their courage, outstanding achievements, or noble qualities. It could also be a superhero with special superpowers. Read more